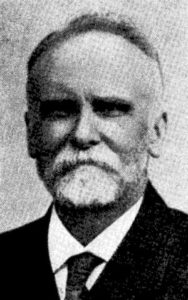 During the winter of 1880-1881,
Mr. Alexander Marshall arrived in Orillia from Scotland, preaching a message that Christ Jesus had died on the cross was buried and raised again from the dead by the power of God.
He preached that through faith anyone could have eternal life, complete forgiveness of sins and peace with God.
Many believed this message, and gathered in the name of The Lord Jesus Christ, according to the teaching of the Word of God without any denominational affiliation. 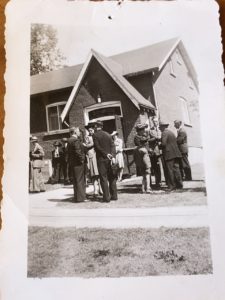 The gospel meetings were originally held in a local YMCA building, eventually they moved in the Kennedy building at the south west corner of Peter and Mississauga Street in an upstairs hall.
In early 1881, a baptism was held for eleven converts in the chilly waters of Lake Couchiching, near Cedar Island.
On April 17th a small group of these believers (nicknamed “Marshallites” after the preacher met for the first time in Quinn’s Hall to celebrate the Lord’s Supper according to the request of the Lord Jesus Christ recorded in Luke 22:19,20 and the practice of the early disciples in
Acts 20:7 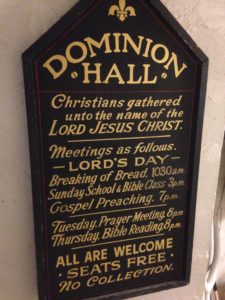 During that year, over 200 believers were baptized in this area, and other similar groups of Christians formed in local communities such as Foxmead, Warminister, and Severn Bridge.
Later, the group in Orillia gathered at the Shaftebury Hall on Mississauga Street.
Mr. Robert Teifer also had gospel meetings in another upstairs hall at 9 Andrew Street North, known as Dominion Hall.
In September 1907, a gospel hall had been built at 56 West Street North and was opened, this served as the gathering place for 71 years.
Shortly after these years, a division took place between the members of the group, and part of the company returned to Dominion Hall at
9 Andrew Street North.

During the Great Depression, the congregation purchased a small piece of property and errected a new building at
30 Andrew Street South spite of financial difficulties of the times.
The building was simply known as “Dominion Gospel Hall” simply in memory of the previous place of gathering.
These Christians moved there in 1938, the congregation continues to meet there today.

We are compelled to thank God and recognize that